"THIS IS THE YEAR...for your best lens-look EVER!!!" screamed the headline of a women's magazine. It seemed they all proclaimed it was the year of your best something ever. It was the January issue and just as people were tiring of their snowflake sweaters and Santa hats, so too were they tiring of their red-and-white-stripe "candy cane" frames and the glasses with one lens tinted red and one tinted green some had been wearing (the odd visual effect not deterring them from being in sync with the season) and were eager for a new look. Samantha picked up the magazine, blew off the dust (it was from a few years back) and opened it to the article about lens-looks.

In the autumn I was tired of the relationship with Jim. Although the first year after we had met he seemed to be the best guy in the world for me, although the second year everything was still going on well, the third year I realized he was not the right man. I got sick of his bodybuilding training, the strongish way he spoke, his friends, and his instructions that I should wear contact lenses instead of my glasses.

I sat in my office glancing over the paperwork that was piled up on my desk, and I half-heartedly opened another envelope, glanced at the bill inside, and placed it on the to-be-paid pile. I just wasn't with it today. Paperwork had never been my number one priority, and my procrastination about doing it had caused me more than a few problems when it came time to satisfy the government. But, I had no wish to go out into the store either, as I was as deep in the dumps as I could possibly be.

I loved my work. I was totally fascinated by my customers and I had over the past 20 years built up the best, most respected optical shop in the metropolitan area. When I first decided that I wanted to open an optical store, based on my experiences, I discovered that there was a real need for an optical shop that specialized in strong prescriptions, so that is the market niche that I developed. And, for these 20 years, I had maintained all my original customers, as well as drawing many new customers from 2 other nearby cities.

Dita with glasses and an occluder. Technically it could have been better, but I got tired. 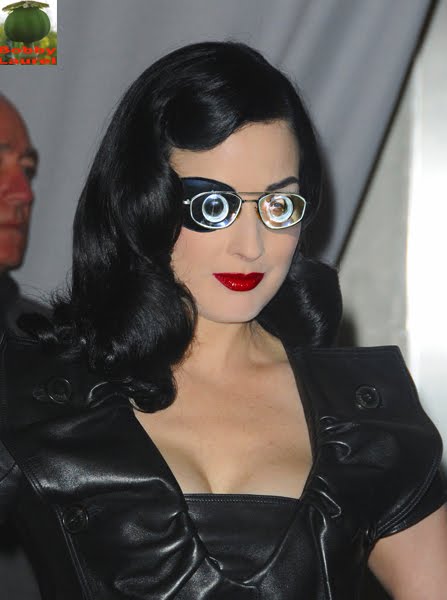