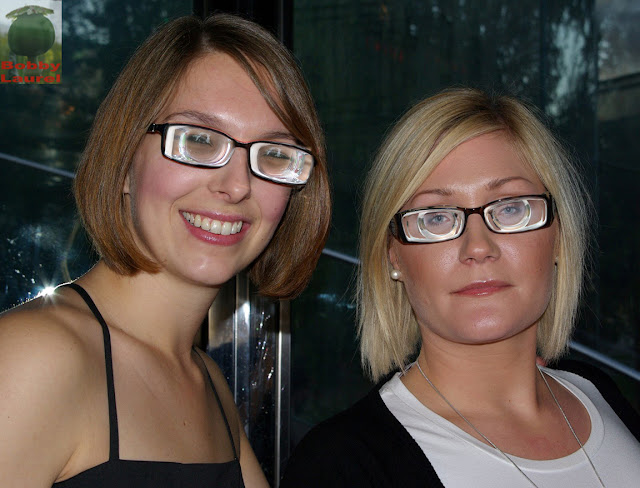 by Specs4ever
The church was packed. Dad had been in business in this town for 50 years, and even though he had retired 5 years ago at age 75, the townspeople and those from the surrounding countryside had packed the church out of respect. Everywhere I looked I could see the reflections glinting off the faces off the plano fronted lenses of the glasses most of the crowd wore. Oh sure, there were a few plus lenses in some of the glasses out there, but most of the crowd wore reasonably strong minus lenses. And of the 20% or so of the crowd that wasn't wearing glasses, almost all of them wore contact lenses. Dad had been very successful.

(Note: this story is based on a concept and a short story written by a woman known as ParaGirl. I have adapted the subject matter, and added a few frills. Cathy, this is in your honor and with thanks!)

The whole thing began with a big shot of irony, in that I saw it by accident. I was driving along through a neighbourhood and I passed by a garage sale when I saw someone handling a white cane - the kind that blind people use.
I circled the block, trying not get excited. When I came back around the cane was leaning, fully extended, against a table. I parked by the yard sign that said ESTATE SALE and got out, pretended to look at other items first before coming to the table which not only had the cane, but a couple of Braille books and a talking watch. Then I saw the label maker. Yes, it was Braille, too! I'd hit the mother lode!

"Emma, is this you?" she heard somebody behind her and turned around.
"Julian, hi, wow it must have been years…" Emma replied when she recognised one her former school mates.
"Yes, indeed, my graduation was about ten years ago and yours nine, right?"
"Could be about right."
"What are you doing here anyway?"
"I was going to buy a new pair of glasses and I’m overwhelmed by the variety of frames. And you?"
"I just wanted to buy myself some contact lens paraphernalia, but then I saw you and hey, it’s great to see you."
"Yeah, I didn’t know you wore contacts. Erh, listen… if you could help me choose frames, I’d buy you a coffee."
"Okay, agreed."
Julian gave Emma some great advice and eventually she settled for a pair of dark red plastic frames, which they both thought looked great. Julian bought his contact lens paraphernalia and they left and went to one of the cafés.


by an unknown author

If I could have had those ten or so years over again I'd have done things very differently. First of all, I'd have never taken a chance on second-best. Listen to me, don't do it. What you see is what you get, no more no less. People don't change, other than getting older. When you choose a partner, and mean it to be for life, for better, for worse, for richer, for poorer, just make sure you get it right. I drew one good card, I got richer. He helped me achieve that. But being the ungrateful bitch that I am, that wasn't enough. Our relationship disintegrated, and there I was, a business owner, and effectively, emotionally, alone.So every day, I would leave my beautiful home, climb into my fantastic car, drive to my dreamy little store, and sell delightful bits and pieces to a wide range of interesting people. I bought lovely clothes, ate delicious food, and went to fascinating places.
And it was all so wonderful that every night I'd slip between the silk sheets of my deeply luxurious bed, and cry myself to sleep.
Yes, that's right. I married him for his money, his status, and his charm. He was, to everyone who knew me, a Good Catch. Handsome, suave, and generous. We honeymooned in Bali.

The Parable of the Eyeglasses

an adventist free-lance writer and homemaker living in Rockville, MD

Once upon a time, very long ago and far, far away, there was a tiny village where the villagers, for reasons one can only speculate upon, had come to the conclusion that it was a very evil thing for a person to wear (and some felt even to NEED to wear) eyeglasses.
Many of the more religious among the villagers pointed out that it was contrary to nature to wear those ugly things. Obviously God had originally intended for people to see with only their eyes. And furthermore, they reasoned, scripture was full of scathing passages referring to those who would not see. It was perfectly clear to them that these people were openly practising sin by putting on their eyeglasses, and sin was sin and could not be condoned!

Julie woke up, and tried to see the numbers on the clock in her motel room. She moved her head closer and closer to the clock, and finally the numbers came into focus. This was a strange feeling for her, as Julie had enjoyed nearly perfect vision for all of her life. She blinked her eyes a few times, but the blur of things in the near distance still persisted. For the last couple of weeks Julie had noticed that her vision had been blurred, and she had been having trouble reading street signs, and other highway markers, but this morning it seemed even worse than the day before, she was having trouble seeing things clearly only a few feet from her.