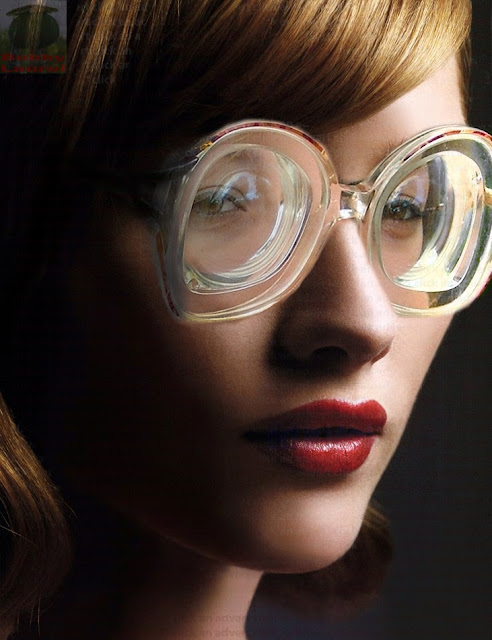 A gentle girl with strong glasses
on Saturday, November 16, 2013 No comments: Links here:

Madison sat at her seat at her classroom desk, and squinted at what the teacher was writing on the chalkboard. No matter how much she screwed her eyes up she couldn’t make out a thing. She had chosen a seat only 3 rows from the front, because last spring, in her old classroom, she had noticed that she couldn’t see anything from where she was, closer to the back. But now, after the summer holidays, she couldn’t even see from almost the front of the classroom. She sighed, as she knew what this meant. Her friend Katie had the same problem last year, and at age 12 she had to get glasses. There were a lot of older kids at the school who wore glasses, so Madison knew it wouldn’t be terrible or anything to have to wear glasses, but she still didn’t like the idea.
Read more ...
on Saturday, November 16, 2013 No comments: Links here:

I was listening to some vintage Karen Carpenter while puttering around my apartment – blind, of course! And her words just put me in a mood.

What I've got they used to call the blues:
Nothin' is really wrong;
Feelin' like I don't belong;
Walkin' around, some kind of lonely clown;
Rainy days and Mondays always get me down

And that is pretty much how I feel. A storm front had cancelled my plans to go simming today. I don’t mind getting a little wet, but unexpectedly stepping into a deep puddle and filling my shoe with water and mud is not fun. Been there, done that – yuck!

You won’t believe what happened to me yesterday. I had an exhausting day at university and was really looking forward to coming home. And I was also mad that I had forgotten to take a book with me that day. Usually I spend the whole journey on the train reading. As it turned out, I could not have been luckier, but I had yet to find out.

It was a hot day and the train was delayed due to construction work in one of the other stations. I had plenty of time to kill and nothing to do, but watch the people around me. Suddenly I noticed a really cute guy, who was talking on the phone and seemed very agitated. He was speaking Spanish, a language I knew very well, so I could overhear parts of the conversation like putas lentillas y puta cuidad, which was more like cursing than anything else. As far as I could make out something was wrong with his contact lenses, but did not know what.

— odd pages of another ‘Story from Shakespeare’

Him that takes what isn’t his’n
When he’s catched will go to pris’n.

Mum asked me today why I sit so close to the television. I told her the truth, I said that’s the way I like to watch it.
Mum’s bothering me again—why do I hold the book so close when I’m reading? I told her the truth again, that’s the way I like to read. Then she asked if I can see the board OK in school. I told the truth, I said yes I can. I didn’t tell her I sometimes see it better if I screw my eyes up, so maybe that wasn’t the whole truth, but it was nothing but the truth. I don’t know why she keeps asking these questions.
The cat’s out of the bag, Mum thinks I need glasses. After supper I heard her asking Dad the name of the opticians where his cousin Robin works. He said “It’s Shakespeare’s isn’t it. Why?” She said, “I want to take Keith for an eye test; you know the way he sits right up against the telly and the way he holds a book when he reads, there was an article in my magazine that said those are signs that he’s short-sighted. I think he needs glasses.” Dad said, “But Robin’s a bit, you know.” Mum said, “What a way to talk about your cousin.” Dad said, “A row of army tents isn’t in it.” I don’t know what all that was about but I’m not bothered. I don’t want an eye test; I can see just fine.
Read more ...
on Saturday, November 16, 2013 No comments: Links here:

Most people laugh when they first hear the story then sometime later they hear it again and it takes on the trappings of truth. The big rig drivers in the northwest will tell you that they know someone who actually knows one of the drivers who have met her. She is blond, brunette, tall, short, good build, kind of chubby, quiet, bubbly etc. but all the time the story is the same. Sam Jennings who has driven for Walters Transport since he was sixteen told me the story one night some years ago while we sat outside Billings at the Grange Truck Stop. It was snowing a full blizzard and both of us thought better of making miles. I asked Sam about the 'Angel', and he said, "My cousin knew a guy who had seen her, darndest thing I ever heard."

The noise, the noise was awful. These darned 3 guys couldn’t stop arguing. If only I could tell them to shut up. I started to cry, and my mother came over to pick me up.

Hard To Find One

It was a bright sunny afternoon in the late 80’s, and I was walking through a park near the campus of a popular college in the city. I spotted a group of 5 girls, all carrying backpacks obviously loaded with books, and whatever they needed for their college course coming my way on the paved path. I always like to look at pretty girls, so I started to give them the once over. The third girl back was wearing glasses, and as I drew even closer I noticed that she was by far the prettiest of the group. It might have been the glasses that made me think this way, because I have a fatal attraction towards females who wear glasses. Unfortunately in the years since contact lenses became affordable to the general public, the chances of me spotting a girl wearing glasses became slim to none. So, this young lady was of definite interest to me.
Read more ...
on Saturday, November 16, 2013 No comments: Links here:

School just hadn't interested me. All the time I sat in classes, I daydreamed about being somewhere else. So, once I got my diploma at the end of grade 12 I left school and went out into the workforce. Unfortunately I had not listened when others told me how hard it was going to be to make a living for myself without a decent education. My first job was as an apprentice mechanic at a new car dealership, and I did all right, but the wages were barely enough to pay the rent on my one room apartment. I stuck with the apprenticeship until I was a trained, licensed automobile repair technician, but as soon as that license was in my hand, I gave my notice. I had been working on some of the vehicles that were owned by one of our major customers, and Mr. Smith had told me that if I ever needed a job, I should come to see him. I did, and he hired me. Mr. Smith owned a construction company, so as a result he needed mechanics to work on his equipment. The pay was a little better than at the garage, but the hours were a bit longer, so I was finding out that this really wasn't much of a step forward.
Read more ...
on Saturday, November 16, 2013 No comments: Links here:

This was so unreal. Here I stood in a courtroom in front of a judge. I had no attorney, and the judge had overruled me at every attempt I made to try to defend myself. I was accused of having made fun of a number of girls in grade school that had started to wear glasses when I was in their class. And, now, almost 20 years later, just as I was graduating from the School of Optometry I was being called upon to pay for my misdeeds. Yes, I had laughed at the kids who had gotten glasses, and I had called them 4 eyes and had even joined with the other kids in taking their glasses from their face, and hiding them until they went crying to the teacher, at which point their glasses would mysteriously reappear. I could not deny that I had done all that, and even more. But as I grew older I had developed an interest in vision, and vision care. I was only weeks away from being an Optometrist. Should this not redeem me for my earlier misdeeds?