I glanced at Darla as we were sitting in the hotel room watching the television. She was really quite pretty, even though the thick biconcave myodiscs that she was wearing became the focal point of her face. I pushed my own identical –23D biconcave myodiscs a little closer to my face in order to see her features a little bit clearer. Darla was maybe an inch taller than my 5’6”, and she was a little bit heavier, probably about 135 lbs. to my 120 lbs. She had a much bigger bust, and her long jet black hair was tied back in a ponytail, whereas my mousy brown hair was cut short in sort of a pageboy style.
We very seldom ever wore glasses together. These glasses that we were both wearing are in my own prescription, and Darla has to wear plus contact lenses under her pair in order to be able to see. We had just returned from another day of blindsimming. In this city, in this hotel, I am the blind one, and Darla is my seeing eye assistant, the one who gets to wear coke bottle glasses. In another nearby city, I get to wear the glasses, and Darla gets to put in the blind contact lenses. This isn’t as much fun for me, as I really have to wear the coke bottles to see. 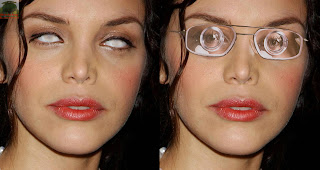