Up until I moved back to the U.S. just a few months ago, I was a contributing editor to the MIRROR, so I will relate as much of the wonderful story about Bobby's stunning photos of Deborah as I can, but I cannot go into any great detail, nor can I reveal any personal information (last names, addresses, etc.) about either Deborah or Bobby. I have been privileged to know both of them as very close friends for quite some time, mainly because I have interviewed each of them many times for my MIRROR articles, and also because I am quite myopic myself (my script is: R -12.50 - 2.50 ax 180 and L -12.00 -2.50 ax 180) and sometimes wear glasses with 1/2" thick plastic lenses instead of my regular soft contact lenses.

Deborah and Bobby were two of Britain's brightest young stars. She was the women's #1 ranked amateur tennis player in the entire British Isles, and he was considered the best amateur football player in the entire British Isles. However, both decided to put their sports careers on temporary hold in order to pursue their dreams: Deborah wanted to become a fashion model, and Bobby wanted to become a fashion model photographer. It wasn't long before Deborah became a huge success as a London runway model, and Bobby quickly became one of London's top fashion model photographers. Their paths crossed constantly, and they soon became very romantically involved with one another, much to the delight of the British people. Then, without leaving anyone (including Bobby) any explanation, Deborah mysteriously disappeared from the London fashion scene and was positively nowhere to be found.

About three weeks after Deborah's mysterious disappearance, Bobby was alone in his London apartment one evening when he heard a faint knock on his door. When he opened his door, he was surprised to find Deborah standing there, obviously quite upset and crying.
After wiping away her tears and giving her a welcome kiss, Bobby asked, "What are you so upset about?"
All Deborah could say was: "Bobby, I've done something really horrible and ruined my eyes!"
"They look just as beautiful as ever," replied Bobby.
"You don't understand," Deborah sobbed. "I must now wear these glasses with their really thick lenses just in order to see."
And she put on a pair of glasses with myodisc lenses that were 1/2" thick.

Upon seeing her glasses, Bobby immediately knew that Deborah's vision was extremely myopic.
"Your glasses are simply beautiful, and they make your aquamarine eyes look even more beautiful than they have ever looked," exclaimed Bobby.
"Come in and tell me all about your beautiful glasses and your beautiful eyes," he requested.

Once Deborah had a chance to calm down, and after Bobby reassured her that he really thought both her glasses and her eyes were extremely beautiful, she told him what she had done. She admitted to Bobby that she had always been quite myopic, and that she had always worn contact lenses with Rxs of R -12.25 and L -12.00; she confessed that she had been very careful to hide that fact from everyone (even him). She explained that she had decided to have laser surgery to totally eliminate her high myopia, so she would no longer ever have to wear contact lenses. Unfortunately, the doctor who performed her surgery mistakenly set the laser to sculpt her corneas to R +12.25 and L +12.00 (instead of R-12.25 and L-12.00), so instead of ending up with vision that required absolutely no correction, she ended up with vision that now required an extremely strong correction of R-24.50 and L-24.00! Since it was impossible for her doctor to correct her vision with further surgery or even with contact lenses, Deborah was forced to wear glasses with myodisc lenses that were 1/2" thick.

Deborah and Bobby were absolutely amazed that they were both high myopes and had been wearing contact lenses with identical Rx's. They agreed that since Deborah could no longer ever wear contact lenses, Bobby would no longer ever wear contact lenses either. In addition to that agreement, they agreed that Bobby would have Deborah's doctor perform laser surgery on both of his eyes, so that he would end up with vision that would also require an extremely strong Rx of R-24.50 and L-24.00!

After the wedding, the two newly-weds honeymooned on the Isle Of Man. It was during that very romantic honeymoon that Bobby took the now famous photos of Deborah wearing her two different pairs of glasses. Deborah had developed some special eye make-up that highlighted her severe myopia, her fabulous eyes, and her extremely beautiful glasses, and she wore that unique make-up for some of the photos.

When their month long honeymoon was over, Deborah and Bobby returned to London. Deborah started a cosmetic company to market her now very popular "DEBORAH U.K." brand of eye make-up. Deborah also decided to start another company to market a new "DEBORAH U.K." brand of eyeglasses, and she debuted her entire new make-up and eyeglasses collections at one of Alexander McQueen's fashion shows, which Bobby photographed for all of the leading fashion magazines.

(DEBorah and bobBY), a charity which funds research for improving laser surgery and developing better contact lenses and eyeglasses for correcting all kinds of eye abnormalities.

[PLEASE NOTE: EXCEPT FOR MY SCRIPT AND THE FACT THAT I SOMETIMES WEAR GLASSES WITH 1/2" THICK PLASTIC LENSES INSTEAD OF MY REGULAR SOFT CONTACT LENSES, EVERYTHING IN THE ABOVE STORY IS PURE FANTASY. I HOPE YOU ENJOYED IT. CZski] 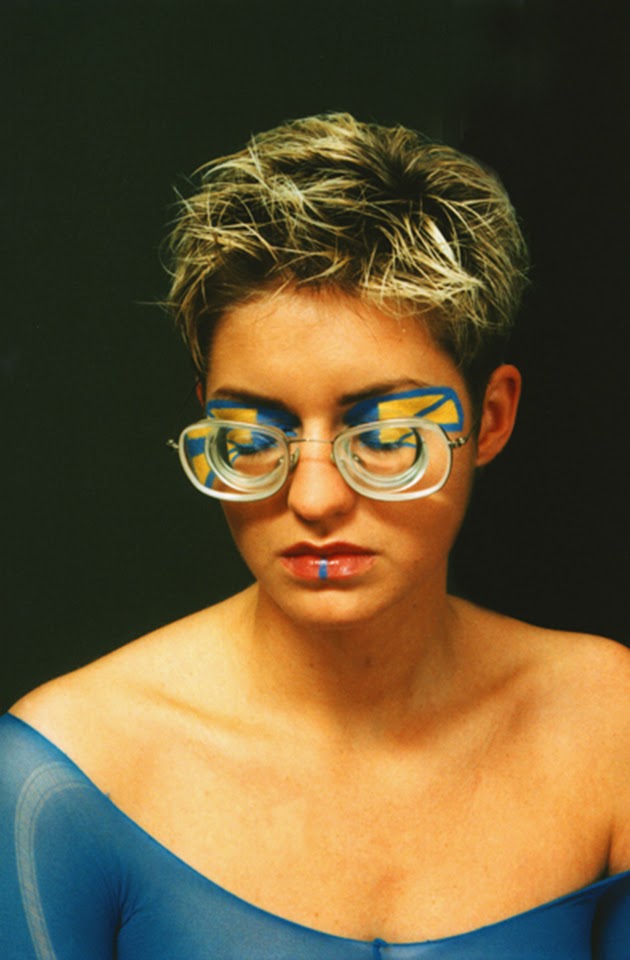