School was a real drag, so at age 17 I escaped the drudgery of learning. Why bother, I reasoned with myself, I wouldn’t ever need any of this stuff anyway. What I didn’t realize that even menial jobs require more than a grade 12 education these days. In hindsight I probably should have become an optician, or a person who worked in an optical laboratory. Glasses, and the optical properties of different lenses was the one thing that had interested me since I was a child. But, since I had a mechanical mind I became a repairman for fuel pumps at gas stations.
Truck drivers must be really dumb. Almost every day I was called out to the truck stop at the Interstate cloverleaf into the city. Some dumb truck driver had either run into the diesel pump with his trailer when he was pulling out, or he had tried to pull away with one of the hose nozzles still sticking in his tank. Even with the breakaway hoses that they used it still took someone with knowledge to reconnect the hose. 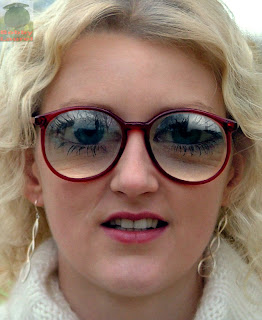 the picture can be enlarged

The fact that Tanya had a plus prescription didn’t bother me enough so that she didn’t get pregnant. She was a very beautiful lady with or without glasses and was extremely attractive to me. We made a very good couple in bed. And when she did get pregnant, we were both floored when the doctor told us we were going to have twins. And we did have twins, a healthy baby girl, and a healthy baby boy. We named the twins Corey, and Shannon. And, while we didn’t plan it, within another 9 months Tanya was pregnant again. Fortunately this time we only had one child, another girl that we named Caitlin.
It was not an easy time for Tanya. She was looking after 3 kids still in diapers, although by the time they were 2 she had the twin’s pretty well potty trained. I was doing reasonably well financially, so Tanya was able to stay at home with the children. And, of course, since she was home looking after 3 babies, she wore her glasses a lot more. By now I really found that the right girl wearing plus lenses was just as attractive as a girl wearing strong minus lenses. And the nice thing about plus lenses was that her eyes didn’t really seem to deteriorate the same amount as those who wore high minus did. Her brother Rick was probably up to around –18 and –16D, and Tanya was still wearing her +7.50D; although she did have to get a bifocal add of +2D.
When the twins were of school age we decided that a trip to the eye doctor was in order. Corey and Shannon are fraternal twins, not identical twins, and while it was a bit of a surprise to us, Corey required a slight minus prescription and Shannon needed a mild plus. Then when it was time for Caitlin to start school, she was found to also be nearsighted. I could no longer figure this out. Tanya should have been a high myope based on her genetic makeup. And, all the children should have been myopic as well.
But, as I have been told so often – The best laid plans of mice and men so often go awry.
Specs4ever
April 2005
on Tuesday, September 11, 2012